3. SUMMARIES OF DISCUSSIONS AND ACE’S COMMENTS

Brief summary of the discussion 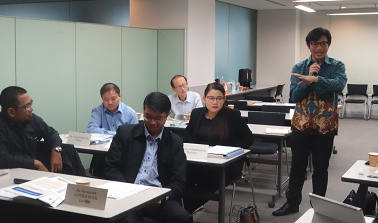 Malaysian colleague made concrete proposals of what to be discussed just at the beginning of discussion.

Then workshop secretariat proposed what to be discussed including Malaysian proposals and the original ones as follows;

1) Review of the evaluation criteria as a whole
2) How to categorize ZEB related item
3) Establishment of EE&C related Awarding System in the countries where there is no such systems.

Then came out some conclusions.

1) Malaysian proposals were understood so reasonable that ACE is going to follow it up to reflect on a revised evaluation criteria.

2) As for the ZEB related concept it was proposed to add onto the“Special Submission Category”. In addition to the existing ones i.e. cutting edge technologies and appropriate technology relevant to the development of EE&C in member Countries in order to promote further EE&C by disseminating ZEB Family concept in ASEAN region.

3) Regarding National Energy Award System, many countries have intentions to establish the one in their own countries, and therefore it became future task what kind of cooperation is necessary.

Comments by ACE after the discussion ;

Through discussions including the proposals of Malaysia to improve the judging process, some inputs were highlighted in terms of EE&C Awards Guidelines as follows;

(1) Discussion was made duly and nicely as for the following matters;

1) On the purpose of the ASEAN Energy Awards to promote EE&C in ASEAN
2) Breakdown of sub-criteria (EM&EEB/GB).
3) Revision of the scoring systems and ranking system such as Top 5, Top 10 or Platinum, Gold, Silver.

(2) Proposals were made on top of the above discussion, outcome was supposed to be dealt as the pending issues;

1) Extension of Pre-Judging time to two (2) weeks to allow BOJ to have enough time for scoring all entries
2) Inclusion of the scores of BOJ who were not able to attend the BOJ Meeting, especially the BOJ from the countries that have no entry submission
3) BOJ to provide the score on entry from their own country Awards (to recognize BOJ as ASEAN’s BOJ instead of by country)

(3) Other points were raised including but not limited to the following;