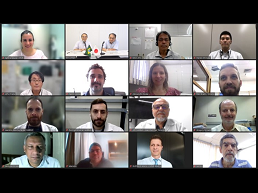 <Workshop>
Under entrustment with financial support of the Agency for Natural Resources and Energy (ANRE ), The Energy Conservation Center, Japan (ECCJ) has been is implementing the “Project on Energy Conservation Promotion for Energy-intensive Industries and Equipment” as the bilateral cooperation for EE&C capacity building program with the Brazilian Ministry of Mines and Energy (MME). Regarding the program of energy conservation promotion for – equipment, the online workshop was held to contribute to the capacity development in order to support the smooth enforcement of the Ordinance No. 234 of 2020 by the Brazilian government, which will introduce the Cooling Seasonal Performance Factor (CSPF) for the energy efficiency performance evaluations for air conditioners from the end of 2022. This ordinance was issued by the Brazilian National Institute of Metrology, Quality and Technology (INMETRO) of Ministry of Economy in order to introduce the ISO 16358-1 CSPF. Agreement was made with the MME to implement training of trainers (TOT) to contribute to the capacity development required for this enforcement, and the first TOT was completed in February 2022. This workshop was held in order to promote the realization by each institution of the specified improvements identified through implementing the first TOT.

[Results]
As per the plan formulated by the 21 leading persons who completed the first TOT, it was confirmed that the improvements described below were being steadily implemented, and it was expected that the above-mentioned ordinance would be smoothly enforced.

・Improvements in the testing facilities, etc. at the two air conditioner core testing institutes*, and the creation of a standardized testing manual
・Improvement of the standard and labeling (S&L) systems relating to air conditioners by MME and INMETRO

In addition to the improvement plan that was formulated previously, special mention is made of the following points where further improvements were realized.

・LABELO PUCRS newly invested in introducing the calorie meter type of testing facility that can test air conditioners up to 60,000 Btu/h, which is currently being constructed.
・To achieve the specific enforcement of the CSPF introduction, the Ordinance No. 269 of 2021 was issued, and following further revisions Ordinances No. 179 and No. 230 were issued in 2022 to advance the ordinance development.

Additionally, the plan for the activities to be implemented in the current fiscal year was discussed, in order to complete these improvements, develop further systems and promote the training of personnel who will lead the testing was discussed and confirmed.
Through implementing the activities in this project, steady improvements will be made to realize the smooth enforcement of the ordinances described above. As a result, inverter air conditioners will be disseminated in the Brazilian market, hence efficiency will be further improved, and it is expected that this will contribute to reducing Brazil’s electric power consumption and its greenhouse gas emissions.

[Implementation Details]
The enforcement of the ordinances described above are approaching, and due to the continued COVID-19 pandemic and the large time difference between the two countries, the online follow-up workshop was held and the following activities were implemented.

1) Following the improvement plan, progress confirmation and the discussions of issues were made concerning the improvements in the facilities of the core testing institutes and the air conditioner-related S&L system developments by government institutions for the enforcement of the ordinances described above, and advice was provided to resolve the issues.

2) In order to realize the improvements steadily to allow the CSPF introduction system to function smoothly and continuously, discussions were made and details were confirmed regarding the activities to be conducted in the current fiscal year and the implementation plan.

Total 19 persons participated in the workshop, with representatives from MME, INMETRO, the Eletrobras electric power corporation, CEPEL and LABELO PUCRS on the Brazilian side, and from the Agency for Natural Resources and Energy, Japan Air Conditioning and Refrigeration Testing Laboratory (JATL) and ECCJ on the Japanese side. At the beginning of the workshop, Mr. Shinoda, Assistant Director, ANRE gave opening remarks outlining the direction of the project, moreover Mr. Gustavo Santos Masili, Director, MME gave remarks to kick off the activities for the current fiscal year. After sharing the improvement progress, active discussions were exchanged and necessary advice was given from the Japanese side.
Going forward, in accordance with the agreed implementation plan, it is planned to determine the details of the plan together with the Brazilian side and to implement the activities including the face-to-face activities while also utilizing online methods by establishing measures to prevent the spread and infection of COVID-19. 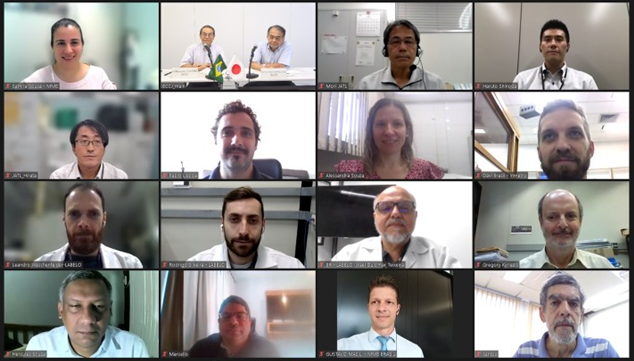 Two other persons participated, but they could not be shown on the display due to camera problems.