Holding of the post meeting in the FY2020 energy conservation support project for ASEAN countries on Mar. 2021 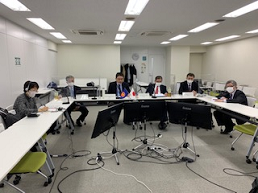 Holding of the post meeting in the FY2020 energy conservation support project for ASEAN countries on Mar. 2021

Under the instruction and financial support of the Ministry of Economy, Trade and Industry (METI), the Energy Conservation Center, Japan (ECCJ) held the FY2020 AJEEP Post Meeting in an online format during the two-day period of March 2 and 3, 2021. At the meeting, ECCJ held discussions with each ASEAN country regarding the results and issues relating to the contents of the support project implemented in the current fiscal year.

(1) Scheme 2 (multilateral dispatch of experts) implemented the fifth year of the training of trainers (TOT) program for developing the qualified energy managers, and ASEAN Trainer qualifications were awarded to 14 trainees from 10 ASEAN countries.

(2) Scheme 3  (narrow the gaps between AMSs on EE&C regulatory system) confirmed the progress condition of the energy conservation legal system preparation and the development of S&L systems and energy management systems targeting Cambodia and Lao PDR.

(3) ECCJ also held exchanges of opinions relating to the future directions of the project, including the FY2021 Basic Plan and further linking it with APAEC Phase-II, which is the action goal of AJEEP and ASEAN countries.

ECCJ held the online meeting to confirm the results achieved by the project in the current fiscal year, and to clarify the issues and share the response measures. The meeting was participated in by the representatives of the Energy Efficiency & Conservation – Sub-Sector Network (EE&C-SSN) from each ASEAN country and by the ASEAN Centre for Energy (ACE), and the participants reassessed the current fiscal year’s project.

(1) Scheme 2 implemented the fifth year of the training of trainers (TOT) program for developing the qualified energy managers, and ASEAN Trainer qualifications were awarded to 14 trainees from 10 ASEAN countries. For participants who were unable to submit reports of energy audits conducted in their own countries due to reasons such as the impact of COVID-19, ECCJ intends to conduct overall assessments after they have been able to implement the audits and submit the reports.

(2) Regarding Scheme 3, ECCJ held online seminars two times in both Cambodia and Lao PDR. In Cambodia, a draft of the periodical reporting was developed and discussions were started in the Working Group. In Lao PDR, a prime minister’s decree on energy conservation was approved and enacted in May 2020.

(3) ECCJ confirmed items with each ASEAN country and with the ACE, including the fact that the activities to be implemented in FY2021 will have basically the same contents as the activities implemented in the current fiscal year. Further, a new scheme is to be developed that will link with the APAEC Phase-II activity plan within the current AJEEP framework from FY2022.

* APAEC Phase-II: ASEAN Plan of Action for Energy Cooperation, Phase-II
This is the action plan relating to energy cooperation in the ASEAN region. The Phase-II implementation period is from 2021 to 2025.