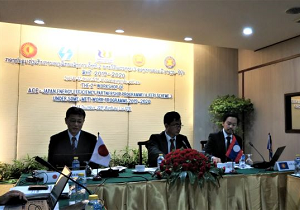 <Dispatch of experts>
The Energy Conservation Center, Japan (ECCJ) held the FY2019 Second Workshop in Vientiane, in December 2019 with the aim of supporting legal framework arrangement on EE&C in Lao PDR. The main topics were as follows.

In the Second Workshop, around 20 representatives participated from the ministries and agencies directly concerned to system preparation including the Institute of Renewable Energy Promotion of the Ministry of Energy and Mines (IREP, MEM) which is the ministry responsible for energy conservation, Electricité du Laos, Faculty of Engineering National University of Laos, five cooperative companies, ASEAN supporters from Thailand (DEDE and PEA) and Malaysia (EC), and the ASEAN Centre for Energy (ACE).

○ Concerning the S&L system preparation, the workshop confirmed the progress state on the regulations draft finalization and the operation system preparation. IREP revised the regulations draft based on comments from ECCJ. The workshop determined to reflect the results of discussions and change to the label affixing processes based on information from Malaysia before finalizing the system.

○ Regarding the energy management system preparation, supporters were invited from Thailand and Malaysia and the opinion exchange was made regarding the operation of the periodical reporting system as a Model Project activity conducted under an academia-industry-government initiative. Going forward, it is planned to formulate a periodical report format draft adapted to the actual situation in Lao PDR. Additionally, the results of simplified energy audits of a shopping mall and a tobacco factory implemented by the participants in the AJEEP energy manager training course were also presented. Understanding on the measurement, recording and analysis of the data required for energy management on sites was deepened among the project participants.
Further, final guidance was also given by ECCJ experts to improve the audit reports.
Based on the three day activities, IREP will finalize the draft Decree on EE&C and the draft S&L regulations, and will create the draft periodical report format, which will be reported at the AJEEP Post Meeting to be held at the end of February 2020.