Implementation of FY2019 energy conservation training for Indonesia on Sep. 2019 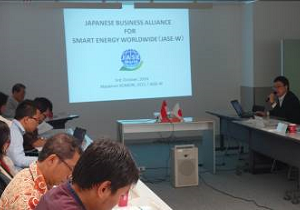 Implementation of FY2019 energy conservation training for Indonesia on Sep. 2019

<Training in Japan>
Under the instruction and financial support of the Ministry of Economy, Trade and Industry (METI), the Energy Conservation Center, Japan (ECCJ) implemented training by inviting Indonesian government officials and representatives of industrial sector to visit Japan for training relating to an energy conservation cooperation project between Japan and Indonesia during the four-day period from September 30 to October 4, 2019.
These activities were related to an energy conservation cooperation project that was agreed with the Ministry of Energy and Mineral Resources and the Ministry of Industry in Bogor, Indonesia in July of the current year, and the following program basic plans and roadmaps were formulated.

To create the basic plan for an energy conservation cooperation project (establishment of a system and program for promoting energy conservation among industries that consume large amounts of energy) which is to be launched in the current fiscal year, Indonesian government officials and representatives from industrial sector were invited to Japan, where the roadmap and the implementation system for the program were determined.
A workshop was held for specifically planning the two programs. In the workshop, information was provided by ECCJ, consisting of an overview of the energy conservation policies, benchmark operations and benchmark approaches under the Japanese Energy Conservation Act and the proposal of specific details, together with the key points of a guide for establishing an EnMS based on ISO 50001, and tools for functionalizing the EnMS. At the same time, implementation system of the program were discussed to enable the promotion of energy conservation in the Indonesian industrial sector through coordinating the outcomes of the two programs.

(3) With regard to the formulation of a guidance for establishment of EnMS and building a system for disseminating the EnMS and energy conservation successful case examples, it was agreed to create an EnMS building guide which incorporates contents that enable specific understanding of the energy management elements and each operation method based on ISO 50001.
In addition, as effective utilization plans for the EnMS building guide, discussions were held on dissemination methods such as a combination of promoting its application among the industrial sector under the initiative of the Minstry of Industy and implementation of it under the initiativ of private companies, and forums on utilaizaiotn of the EnMS building guide in a cooperation between the Ministry of Energy and Mineral Resources and the Ministry of Industry.
Further, an inspection visit was made to a cement factory and exchanges of opinions were held with member corporations of the Japanese Business Alliance for Smart Energy Worldwide (JASE-W) for the purpose of deepening understanding of the activities implemented by enterprises in Japan based on the Energy Conservation Act, and introducing effective technologies for energy conservation in industries which consume large amounts of energy.