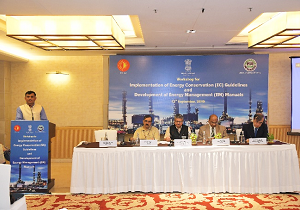 <Dispatch of expert>
To disseminate the “EC Guidelines for the Industrial Sector”, which were completed in India in September last year with support from Japan, activities are promoted in which nine advanced factories representing each industry field are selected as model factories, and their own EM Manuals are created by each factory based on the EC Guidelines. 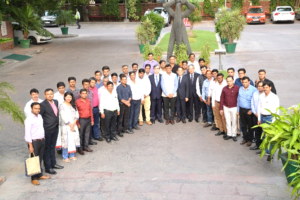 With the purpose of supporting the effective operation of India’s Perform, Achieve, Trade (PAT) Scheme, which forms the core of its energy conservation policy with regard to the industrial sector, India customized the “EC Guidelines for Factories, etc.” that are actually being used in Japan to match the conditions in India, and officially announced them in September last year. Because the EC Guidelines provide the framework for energy conservation promotion in factories, they can be applied to various industrial fields, and each factory is required to create and operate an EM Manual for each of the main pieces of equipment based on the EC Guidelines.

Aiming to plan to announce the EC Guidelines and disseminate them at the same time, the Bureau of Energy Efficiency (BEE), which falls under the jurisdiction of the Ministry of Power in India, selected nine advanced factories as model factories representing each industrial field and promoted activities to create EM Manuals based on guidance from ECCJ. In the current fiscal year, it is planned to newly select approximately 50 model factories, and to develop similar activities. Accordingly, to start the activities at the new model factories, BEE held a Workshop relating to the creation of the EC Guidelines and EM Manuals at the India Habitat Centre in Delhi on September 12. Three experts from ECCJ participated in the Workshop, where they gave lectures relating to the creation of EM Manuals. Additionally, reporting was made of the activities conducted at two of the nine preceding model factories during the intervening period, and lively questioning was conducted which gave a premonition of the activation of EM Manual creation activities going forward.