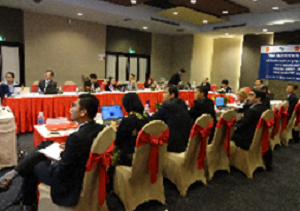 Under the instruction and financial support of the Ministry of Economy, Trade and Industry (METI) (in the project for contributing to the rational use of energy in developing nations and the EE&C capacity building program), the Energy Conservation Center, Japan (ECCJ) held an Inception Meeting over the two-day period of July 17 and 18, 2019 in Ho Chi Minh, Vietnam. At the meeting ECCJ gave explanations including the project plans and details of the activities to be implemented in the current fiscal year’s AJEEP (ASEAN-JAPAN Energy Efficiency Partnership) project and held discussions with each country relating to the current fiscal year’s project implementation details.

(1) Scheme 2 is the continued implementation of the final fiscal year of a four-year plan to develop qualified energy manager trainers.

(2) Scheme 3 is the provision of continued support for various systems relating to energy conservation laws targeting Cambodia and Lao PDR.

(3)  Training for acceptance of GBC (Green Building Code) and ZEB (Zero Energy Building) families is to be implemented.

ECCJ participated in a meeting held in Ho Chi Minh, Vietnam for developing the specific activity implementation plans of the “FY2019 EE&C Capacity Building Program for ASEAN Countries”. The meeting realized participation by the ASEAN Energy Efficiency & Conservation – Sub-Sector Network (EE&C-SSN) representatives from each ASEAN country (focal points or their proxies) and from the ACE, and the implementation plans for the current fiscal year were decided.

(2)  With regard to Scheme 3, ECCJ provided support for advancing the progress of the approval processes of the National Energy Conservation Plan (Cambodia) and the Energy Conservation Prime Ministerial Decree (Lao PDR) and for finalizing the draft S&L regulations in both countries, and additionally proposed and received approval to implement activities which prioritize energy management system preparation.

(3) ECCJ proposed and received approval to implement acceptance training with the purpose of spreading understanding of the GBC and ZEB families and aiming to prepare the environment for realizing ZEB case awards in the next fiscal year.