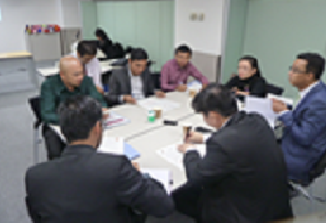 Under the instruction and financial support of the Ministry of Economy, Trade and Industry (METI), the Energy Conservation Center, Japan (ECCJ) implemented training in November 2018 for the purpose of achieving the following objectives targeting the responsible staff members of the divisions related to the building energy efficiency standards (BEC: Building Energy Codes/GBC: Green Building Codes) in the 10 ASEAN country governments and the ASEAN coordinator (ACE: ASEAN Centre for Energy).

(1) Promote popularization of the “ZEB Family Concept” in the 10 ASEAN nations based on an adequate understanding of the Japanese activities for promoting ZEBs.

(2) Specifically, develop evaluation criteria in the newly established ZEB Ready sub-category in the AEA (ASEAN Energy Awards System) and support these movements. At the same time, improve the AEA evaluation criteria and the final judging method to further increase the number of submissions.

(3) Share knowledge and experiences that contribute to promoting the popularization of BEC/GBC and conduct exchanges of opinions with the aim of solving the issues in each country.

Final presentation by each country

An overview of the training implemented during the five-day period from Nov. 5 to 9, 2018 is as follows.

(1) Lectures were given concerning the ZEB promotion situation in Japan, site visits of best practices were conducted, and introductions were given to the move to realize international standardization of the Japanese standards. Continuing from the previous year, the lectures on the benchmark system promotion situation were received well as timely by the various countries including Thailand and Philippines which intend to introduce the systems.

(2) As a result of investigating the ZEB Ready selection method to be incorporated in the AEA system, it was determined to make the selection from among the combination of the following 1) and 2) in consideration of circumstances in each country.

1) For the reference values (baselines) used for calculating the energy conservation rate, the optimum case from among the (several) options that can be assumed based on circumstances in each country should be selected.

2) The energy conservation rate to the reference value in regard to the ZEB Ready certified should also consider the option of a proposal that mitigates the Japanese values. (For example, ZEB Ready could be –40% as opposed to the –50% rate in Japan.)

(3) The various activities of the ASEAN ZEB Promotion Working Group were introduced from among the Japanese Business Alliance for Smart Energy Worldwide (JASE-W) activities. In addition, practical advice for ZEB promotion was given and requests for cooperation were made to the various ASEAN countries regarding the move toward international standardization of the Japanese standards. As a result, the JASE-W activities led to the strengthening of cooperation between Japan and the ASEAN countries.

(4) During the information exchanges held afterwards, it became clear that the ASEAN side intended to request further cooperation from Japan for enhancing the BEC/GBC themselves. Based on this point, from the next fiscal year, in addition to following up on the results this time ECCJ is considering implementing activities that also focus on the BEC/GBC from new viewpoints.