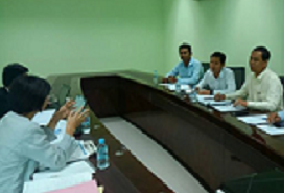 The Energy Conservation Center, Japan made a follow-up visit in November 2018 on the themeslisted below in order to check the progress of the development of a legal system after the Inception Workshop in Cambodia held in September 2018 and to support the operation.

Exchange of opinions about the progress

Consultation on specific operations in the future

Construction works at many places in the city

The director and four staff members in charge of energy conservation from Ministry of Mines and Energy (MME) and one participant from Institute of Technology of Cambodia (ITC) attended the meeting in the follow-up visit. The progress after the Inception Workshop and the matters to be implemented by the Second Workshop (which will be held in January 2019) were confirmed.
・It turned out that the national energy conservation plan needs to be revised based on the comments made by the relevant ministries and agencies. The plan will be approved in the beginning of 2019.
・The suggestions by the ECCJon the S&L system (Rating Standard, Energy Label) and the regulation draft were accepted, reaching an agreement on presentingan amended draft in the Second Workshop (January). Especially regarding finalization of the regulation draft, agreement was made on developinga final draft based on comments by the ECCJ in the Second Workshop.
・Regarding the development of an energy management system, the ministerial formalities are in progress for conducting investigation of the actual statesof the total energy consumption of heat/electricity and the energy management offour energy-intensive companies. The ECCJ proposed a scenario that would allow an efficient development of the system, which included development of a standard for designation of operators including cooperative companies through operation of the model project, EC guidelines,an energy manager qualification system, etc. It was confirmed that in the Second Workshop, the MME would report the result of the investigation of the actual states of energy consumption and theECCJ would make re-proposal on composition of the model project.
In this follow-up visit, the matters to be implemented before the Second Workshop andthe matters to be reported in the Second Workshop were clarified.
In addition, the MME provided the latest information about development of the energy conservation promotion framework in 2019 and afterward.
It is expected that along with development of the framework, the development of a legal system on energy conservation through the AJEEP Scheme 3 activity in Cambodia will be further speeded up.